Reprinted from The Sandoval Signpost 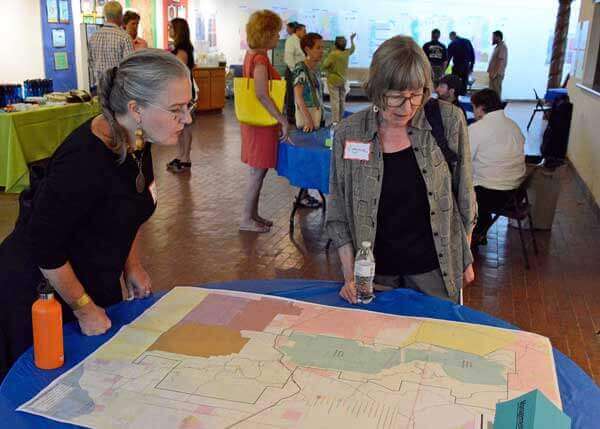 Amy Ostlie of Tucson, but soon to be of Placitas (left), and Virginia Seiser of Albuquerque look over a map of the Sandia Mountains during a meeting on updating the Cibola National Forest management plan. Both are members of the Great Old Broads for Wilderness. Photo: Bill Diven

A vision for the future of the Sandia Mountains and the other three mountain districts of the Cibola National Forest is taking shape largely through the work of groups in Placitas and other communities.

It’s a vision that when combined with an environmental impact statement and approval by the U.S. Forest Service (USFS) will guide management of the Sandia, Mountainair, Magdalena and Mount Taylor ranger districts in the coming decades.

Should the vision ultimately include new wilderness areas, that will require additional approval by Congress. There are, however, multiple lesser designations to preserve and enhance the forest assets.

“How do you want it managed?” Forest Supervisor Elaine Kohrman asked during a July 22 meeting in Placitas. “Are there areas that are different or unique?

“If there’s a place that’s unique, we can figure out how to manage it.”

The meeting followed release of a 99-page draft describing “desired conditions” for the ecological and community uses in the four districts. For the Sandia, a 14-member landscape team drawn from surrounding communities and agencies worked with USFS staff to define the vision.

“We all share in a passion for this area,” said John Barney, a team member and a manager in the Bernalillo County Parks and Recreation Department. “Based on what we know now, what do we want the forest to look like in the future?”

The draft document is now open for public comment and is posted on the Cibola website along with other documents at www.fs.usda.gov/cibola.

“For us in the land grant, it’s about preserving historic sites,” Rebecca Correa, vice president of the San Antonio de las Huertas Land Grant, told the Signpost. “I think this is the first time all the different stakeholders, the subdivisions of state government, that we have had this much access and shared our overall vision.”

During the meeting she also noted the Sandia Mountains watershed is vital to the three Placitas acequia systems irrigating crops and to the water system servicing the village.

USFS says the vision statements will guide development of policies for vegetation, wildlife, recreation, and cultural resources. The final plan will replace one approved in 1985.

The land grant, a member of the landscape team, hosted the Placitas meeting with support from the Coronado and Edgewood soil and water conservation districts and Bernalillo County Open Space.

Two more area meetings are planned on August 5 at the Albuquerque Open Space Visitor Center on Coors Boulevard NW and August 12 at the Cañon de Carnue Land Grant Hall on State Route 333 in Tijeras. Both start at 5:00 p.m.

The landscape teams collected 1,100 comments in the four districts in preparing the draft of desired conditions. September 25 is the deadline for commenting on the desired-conditions document.

The plan draft including any wilderness recommendations is expected later this year or early in 2016 with final approval of the plan and environmental statement targeted for early to mid 2017.

Comments from among the forty people attending the meeting included a desire for places of solitude and areas both safe and accessible and more primitive with attendant risks. The Sandia Ranger District, which extends from Placitas through the Sandias into the Manzano Mountains south of Interstate 40, already includes nearly 38,000 acres of designated wilderness.

Among the topics covered in the draft are vegetation types, the wildland-urban interface and fire concerns, riparian areas, watersheds, wildlife species, grazing and forest products, developed and dispersed recreation, and cultural and historic resources including areas of importance to land grants and Native Americans.