From the Front Lines of Defense and Hope

From the Front Lines of Defense & Hope

Since our last Broadsides, we regret to inform you (in case you missed it) that we are living in a new reality. Within minutes of President Trump’s inauguration, all references to climate change disappeared from the White House website, and the White House Council on Environmental Quality’s (CEQ) website vanished into thin air1. 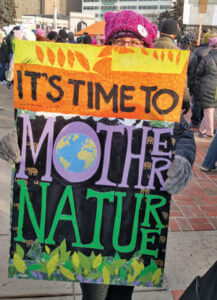 Within days, the new president instigated drastic changes to laws and policies that protect public lands and the environment. As I write, executive orders pave the way for the Keystone XL and Dakota Access Pipelines, and environmental reviews and approvals have been expedited. More will unfold, alarmingly, before this newsletter reaches your mailbox. Some actions will require congressional approval. Yet with a congressional majority hell-bent on eliminating environmental protections and exploiting public lands for profit, little appears to be sacred.

There are no “alternative facts” about it:  grassroots democracy requires every single one of us to commit to our values, find a place to plug in, and speak up for public lands and waters like never before. Three focus areas, adopted by Broads’ Board of Directors in August, serve as our guideposts.

“Defense! Defense!” will be our chant, and we’ll use every rule in the playbook—from being grassroots scrappers to joining with partners to litigate like crazy—and everything in between.

Defending monuments put in place through the Antiquities Act ranks high in priority; likewise defending laws like the Antiquities Act itself and many others in the bullseye—the Endangered Species Act, National Environmental Policy Act, Wilderness Act, and more. We can’t predict timing of attacks, but we can guarantee a full court press by Broads, our members, and our allies.

It’s game time—get to know your legislators! As a constituent, you can draw attention to their views and votes, joining with others and inviting local media along. Make your statements visual—inject Broads’ humor—whether expressing dissatisfaction or appreciation. And always share a compelling story about why these protections matter to you, and to everyone.

On its first day, the newly composed House of Representatives voted in rules to reduce valuation of national public lands, greasing the skids for a public land give-away. This marched in lockstep with the Republican Party platform adopted last summer, which supports transfers of federal public lands to states.

Our vigilance to keep public lands in public hands will be tested. Pay close attention to new bills introduced to Congress—watch Broads’ Facebook page and emails, and sign up for alerts on bills you’ll follow at www.Congress.gov. Call, email, and especially meet with congressional representatives and their staff. Ask questions at town halls. Be proactive and initiate city, county, and state resolutions to support national public lands. As an example, state lawmakers passed Public Lands Day in Colorado last year, the first such holiday in the country.

Use your pen to write letters to the editor, op-eds, and other media pieces to share why you value public lands—Congress watches these closely as an indicator of what their constituency wants. Work with partners to show the love for national public lands—hunters and anglers, youth groups, the outdoor industry, tribal nations, Hispanic groups, local business leaders. These efforts take time—start now!

Make public lands part of the solution to climate change

Climate change is the most heart-breaking challenge, with an anti-science president who views climate change as a hoax, buoyed by cabinet members and lawmakers who waffle at best. Each day brings a new threat to overturn climate gains and incentivize fossil fuel extraction.

While Obama’s administration advanced global climate protections, it gave oil and gas companies more access to U.S. public lands than they could even use. From 2009–2015, BLM offered up 28.7 million acres of leases, of which companies leased 6.7 million acres. In 2016, companies chose not to drill on 19.4 million acres of their total leases, in spite of approved permits and completed environmental reviews. This tells us two things:
1) oil and gas companies already hold excess leases and don’t need more access to public land; and, 2) economics has not favored increased drilling. The money’s on our side as long as the price of renewables and battery storage keep dropping. Besides, energy conservation and efficiency have greater job potential than oil and gas extraction. ely, with climate change looming, time is not on our side. As a climate advocate, you can back lawmakers who support climate action and work in tandem on policy development, education, and media. State and local policies often lead the way, and states like California and Oregon drive the innovation highway. Join and build that groundswell of public support. People want clean energy—they just have to see that it’s possible and affordable.The 2016 election has jump-started a potent period of civic activism, shaking American complacency like no other time. Passion and commitment have risen meteorically, made tangible by the number of people at every meeting and rally—most dramatically, at January’s Women’s March (see pg. 4). Broads’ grassroots work is bursting at the seams; our focus is helping Broadband leaders and individual members fight effectively and continuously to protect wild public lands.

Still, I find myself asking, like singer Greg Brown in his song The Poet Game, “Why does good change take so long?”

Whatever it takes, we are in it for the long haul; we will be fierce, demanding, indefatigable, and have some fun while at it. Some days it’s painful and shocking, but we must keep up the momentum and stay involved. Hard times, we know, have always built the most effective movements for change.

1. The CEQ, formed by Congress in 1969 through the National Environmental Policy Act, coordinates federal environmental efforts. Among many important functions, it plays a critical role in presidential monument designations.