If you want to see Flodine Park and Yellow Jacket allotments retired from grazing and restored to health, you can submit comments by November 23 to BLM Tres Rio Field Office, 29211 Highway 184, Dolores, CO 81323 or to Garth Nelson at gnelson@blm.gov. 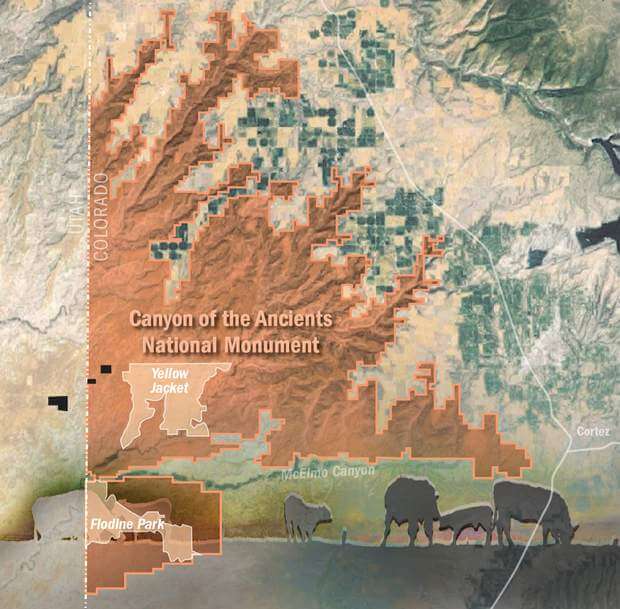 Parcels are not leased; protecting the land will harm no one

You can’t tell a book by its cover—or a story by its headline. The article appearing October 4, “Environmentalists Stop Grazing in Monument” needs, as Paul Harvey used to say, “the rest of the story”.

The two parcels in question in Canyons of the Ancients National Monument (CANM) have not been permitted for grazing in ten years. In 2005, the prior permittee, Wesley Wallace, chose not to renew grazing permits and did not sell permits to another rancher, which is typically how grazing permits change hands. When Wallace put his adjoining personal property (4,573 acres) on the market and found no buyers, he asked the BLM to consider a purchase. The BLM recognized the property contained significant natural and cultural value as it included ancestral Puebloan archaeological sites and 4.5 miles of a rare perennial stream with habitat for sensitive, endangered, and threatened species. The BLM completed a National Environmental Policy Act (NEPA) process and used $3.3 million dollars of taxpayer funds to purchase the property. These lands helped complete the vision for CANM, which was designated in 1999 (after many years of effort) to protect the largest concentration of Native American archaeological sites in the U.S.

In 2010, after a lengthy public process, CANM completed its Resource Management Plan (RMP) to guide the supervision of the natural and cultural resources the Monument was created to protect. This plan allows for grazing but it also allows for permanent retirement of vacant grazing allotments when resources on the ground do not meet BLM rangeland health standards or when livestock grazing is negatively impacting cultural sites.

Surprisingly, more than 90% of CANM is grazed by livestock and nearly all the allotments fail to meet BLM’s rangeland health standards in this fragile desert environment, which is further challenged by ongoing drought and climate change.

Even though Flodine Park and Yellow Jacket allotments have not been permitted for livestock for 10 years, trespassing herds of horses have continued to graze and the allotments still show injury from previous livestock grazing in upland and riparian areas including:

Additionally, the endangered Colorado pikeminnow was discovered in Yellow Jacket Creek in 2007 along with several other BLM sensitive fish species.

If the BLM can’t retire the two allotments from grazing under these conditions, under what conditions would an allotment be retired?

When the Monument, without a public NEPA process, illegally proposed to issue new permits to two ranchers, there were 14 applicants. Why so many applicants? Federal grazing permits are sweetheart deals for ranchers that the public heavily subsidizes. Monthly fees are $1.69 per Animal Unit Month (AUM) compared with $15 per AUM (or more) on private property. The cost to administer federal grazing permits is 7 to 8 times the revenue. Add in protection and monitoring of cultural sites, noxious weed control, infrastructure, predator control, endangered/sensitive species management and mitigation, water quality impacts, erosion, etc. and the taxpayer costs rise to more than $21 for every dollar ranchers pay in fees.

Keeping these two allotments free of permitted livestock, as they have been for more than a decade, may disappoint 14 ranchers, but it is a tremendous opportunity for the BLM to protect these lands and let them heal. No rancher will suffer if grazing is retired on these two parcels. There is no existing grazing permittee and no base property with preference for a grazing permit.

The American people have an expectation that national monuments will safeguard our public lands and rich cultural heritage. This is the BLM’s chance to take effective steps to manage CANM for values that all Americans hold dear.

BLM is inviting the public to provide scoping comments as they develop a range of alternatives for the upcoming Environmental Assessment to consider reopening these areas to grazing. If you want to see Flodine Park and Yellow Jacket allotments retired from grazing and restored to health, you can submit comments by November 23 to BLM Tres Rio Field Office, 29211 Highway 184, Dolores, CO 81323 or to Garth Nelson at gnelson@blm.gov.

This op-ed appeared in the November 8, 2015 issue of the Durango Herald.