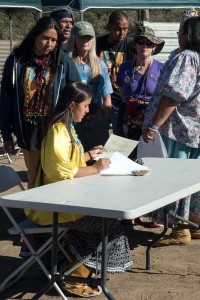 Sacred to the San Carlos Apache Tribe, Oak Flat is part of a 2,422-acre federal land exchange made with a multi-national copper mining company. Though protected from mining by executive order in the 1950s, over the past few years several bills have been introduced to facilitate this exchange, but have failed. Proponents took a different tack and buried the exchange in the FY2015 National Defense Authorization Act, which Congress passed in the last days of December.

Oak Flat is part of the Tonto National Forest. A portion of the copper deposit sits underneath the Oak Flat Campground, which is a popular destination for hikers, campers, birders, and rock climbers.

Krackow, were invited to sign the proclamation on behalf of Great Old Broads for Wilderness

According to an article from Indian Country Today Media Network, San Carlos Chairman Terry Rambler said the Tribe is “organizing an all-out campaign to stop the transfer of Oak Flat”.

“We will continue to be advocates and stewards for this wild land and fight to save Oak Flat for today and future generations,” Broad Jennie Cobb declared.