We see this land acknowledgement as a living document that will  become more robust as we continue on our path of learning. We recognize further changes may be needed, and we welcome feedback.

The national office of Great Old Broads for Wilderness in Durango, Colorado acknowledges that our sustenance and prosperity is derived from lands from which Native peoples, who have been caretakers of these lands for hundreds of generations, were forcibly removed. These lands are the ancestral homelands of contemporary Hopi and Pueblo peoples, who lived, worked, and prospered here before moving forward in their long migration to their present-day homes in what is now known as New Mexico and Arizona. The places they lived and the structures they built are not considered abandoned, and people continue to return to these places today, greeting their relatives who still inhabit this living cultural landscape. Nuche (anglicized to “Yuta,” then “Ute”) peoples, particularly the Weeminuche Band (“the old ones”) have no migration story. Their history begins here, and it has been so since time immemorial. 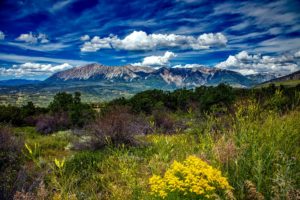 By the time Spanish explorers arrived in the southwest in the late 16th century, there were a multiplicity of Tribes in the area including a host of Pueblos, the Cheyenne, Arapaho, Apache, Shoshone, Comanche, Kiowa, and Diné (Navajo). The doctrine of manifest destiny, coupled with the Colorado gold rush of 1858, began a campaign of genocide and forced dispossession of Indigenous people from their lands and their cultures. When elimination of the Ute people failed, a campaign of forced assimilation followed. A series of Treaties in the 1800s dispossessed Ute people of nearly the entire landmass of what is now known as Colorado. Some Ute bands were forced to the Uintah Basin in what is now known as Utah, and the Moache, Capote, and Weeminuche bands were forcibly relocated to a strip of land 15 miles wide and 110 miles long south of Durango. When the Weenuche band refused allotment in 1895 (a tactic intended to assign individual parcels of land to individual people in an attempt to destroy the traditional collective ownership of lands), Chief Ignacio led the Weeminuche to the west, to what is now known as the Ute Mountain Ute Reservation. We acknowledge that Mesa Verde National Park was excised from Ute Mountain Ute lands, stolen without consent or compensation by the federal government in 1906. The Moache and Capote bands remained on the Southern Ute Reservation, and despite the further erosion to their homeland when European settlement was permitted on lands not allotted, they have used their sovereignty and western systems to become one of the most prosperous Tribes in America.

Today, the only two Tribes recognized by the federal government in Colorado are the Ute Mountain Ute Tribe, headquartered in Towaoc (the Ute word for “thank you”), and the Southern Ute Tribe, headquartered in Ignacio (named for Chief Ignacio). Near Towaoc, the Ute Tribal Park allows visitation with a guide to deepen awareness of Indigenous heritage. In Ignacio, the Southern Ute Museum adds richness to the culture of the region. In addition, the Ute Museum in Montrose, adds to Colorado’s history with stories of all Ute peoples across all three federally recognized Ute Tribes.

We acknowledge the lives and histories of these Indigenous peoples, along with those of the citizens of more than 200 Tribal Nations now living in Colorado, and we recognize the heinous injustice of European settlers who exploited and expropriated Indigenous peoples and resources.

We know that this land acknowledgment is but a small, first step towards reconciling our histories. We commit to learning more about the Indigenous peoples in each of the areas where our Broadband chapters are working for conservation, and pledge our time and resources to serve the causes of healing from trauma while advancing Tribal sovereignty and self-determination, and working for equity and representation at every table where decisions are made about the management of all the lands of this continent, all of which are Native homelands.