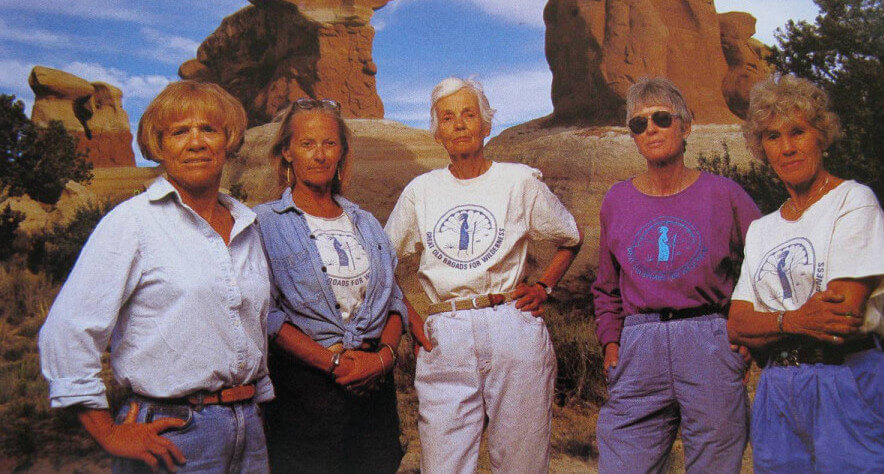 Great Old Broads for Wilderness was founded in 1989 on the 25th anniversary of the Wilderness Act by a feisty bunch of lady hikers who wanted to refute Utah Senator Orrin Hatch’s notion that wilderness is inaccessible to elders. About that time, wilderness designation had been proposed for Escalante, and Senator Hatch opposed it, saying, “if for no other reason, we need roads for the aged and infirm.”

Founder Susan Tixier and her fellow activists were outraged, and with sudden clarity, saw that an important voice was missing from the environmental movement: the older woman—impassioned, experienced, not afraid to speak out, and definitely not needing roads. The group committed themselves to grassroots advocacy to preserve wilderness and wild places for future generations.

What’s in a Name?

Tixier and her colleagues happily settled on their role and purpose, but hadn’t yet decided on what to call themselves. Fate brought an answer to them. One fine day while the gang was out hiking and discussing what action to take next, they came upon a group of elderly ladies coming off a trail—dusty, tan, sinewy, and gray-haired. Someone remarked “What a bunch of great old broads”.

The name stuck. It captured the spirit of the budding entity they envisioned, emphasizing the old and the feminine. More importantly, the moniker had humor, a core value of the group from the beginning.

The early framework declared Broads to be a nonprofit, social organization dedicated to the protection, use, and enjoyment of the wilderness (designated, proposed, or imagined).

The early days were informal—there were no dues. To become a member you just had to declare yourself one, and then you could buy a T-shirt to proclaim it to the rest of the world. The point was to have fun while doing what you were passionate about.

The Broads sat around kitchen tables and brainstormed. The plan was to spend their time and energies on action protecting wilderness, not creating a formal organization with a paid staff.

A Force to Be Reckoned With

By 1993, with a growing membership and expenses, the board decided to institute annual dues—though payment was still optional. In 1994, it became necessary to hire a staff person to keep the membership database, publish the newsletter, Broadsides, and handle public relations. Broads was on its way to becoming a cohesive organization.

Today, Broads has a small staff and our ranks have grown to more than 8,500 members and supporters. There are nearly 40 Broadbands (chapters) in 17 states across the country dedicated to local and national wilderness issues. Our members include men (Great Old Bros) and younger women, too.

Wherever there are wilderness concerns, you’ll find Broads jumping into the fray.