What are Public Lands?

Public lands are not owned by individuals or businesses—they belong to all Americans. Government entities—local, state, or federal—manage them on our behalf.

Because the lands are held in trust for the public, every American has a say in how these lands are managed.

Most of the lands Broads are working to protect are federal lands managed by four Federal agencies. These lands, when claimed by the US government, were mostly Native American lands. 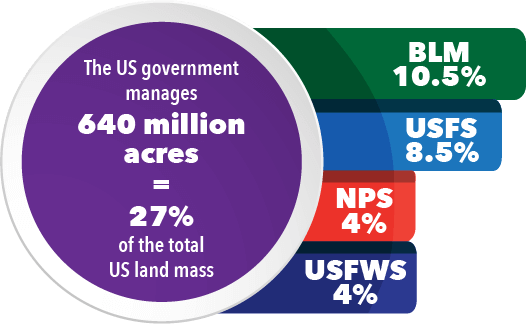 The bulk of the management job is split between the Bureau of Land Management (BLM), managing 10.5%, and the Forest Service (USFS) managing 8.5%. Two other agencies manage smaller pieces—the US Fish and Wildlife Service (USFWS) and the National Park Service (NPS) each manage about 4% of US land.

The BLM, the USFWS, and the NPS are agencies of the Department of Interior, while the USFS is an agency of the Department of Agriculture. This curious arrangement continues to reflect the view of USFS founder Gifford Pinchot that forests were agricultural products to be managed for “wise use,” rather than preservation.

The agencies that manage most of our public lands are not strictly in the business of protecting our lands. In particular, the missions of the BLM and the USFS focus more on using resources and meeting needs for current consumption. That’s why the US government leases public lands to be used for logging, grazing, fossil fuel extraction, and mining.

The mission statements of the BLM and the USFS are similar. Both agencies operate under a “multiple use” guideline, managing for both current consumption and preservation for the future.

The USFWS has a more eco-centric mission to “conserve, protect and enhance,” wildlife and the places they live. However, the ultimate goal remains people-centric—management for the “continuing benefit of the American People.”

The National Park Service’s mission is distinctly different and clearly preservation-centered, calling for the NPS to “preserve unimpaired” “cultural resources and values.”

But of all public lands, only designated wilderness areas are fully protected from development.

A Concern for Conservation

When people began to see the devastation of natural resources and loss of wild lands in the US, particularly to logging and the damming of Hetch Hetchy in California’s Yosemite, they began to formulate legislation that would protect wild lands in perpetuity. That was the genesis of the Wilderness Act, which was signed into law by President Lyndon Johnson in 1964.

This law gave Congress the power to designate lands as Wilderness Areas. This is the highest form of protection for wild lands, a designation that protects those lands from future development of any kind. In fact, these are lands where there are no roads, no structures, no “mechanized” travel (including mountain bikes) and “man is only a visitor who does not remain.”

Broads have long supported and worked to pass legislation to create and expand the nation’s designated Wilderness Areas. But this type of legislation is often challenging to get through Congress, so most of Broads’ current work is related to reducing the impacts of threats—including land use and climate change—to the wild public lands that do not have Wilderness protection.

Your voice truly matters when it comes to shaping America’s public lands policies, and there are ways you can make your voice heard: